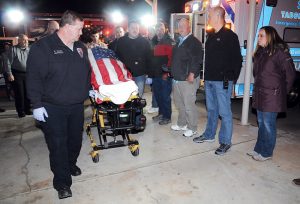 First responders from multiple agencies escorted Cox from the Myrtle Beach hospital to Inman-Ward Funeral Home late Saturday, three families beginning their mourning for Cox who was known for having the heart of a servant that extended from his blood relatives, his firefighting and EMS brethren, and the owners and staff at the funeral home he had also served for many years.

Several dozen firefighters and others were at the funeral home, a salute offered before the flag-draped stretcher was moved from the ambulance to the funeral home, where staff was waiting to render service to one of their own.