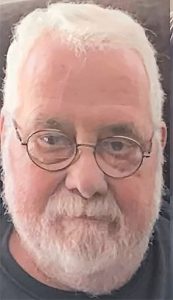 Darrell Wayne Adkins, Sr. died peacefully at his home in New Port Richey, Florida on Saturday, Nov. 14. He was 76.

He was preceded in death by his mother, Devera Faircloth Adkins of Tabor City; his father, Sebert “Jim” Adkins of Racine, West Virginia; and a brother, Michael Adkins of Charleston, West Virginia.

Darrell was born July 25, 1944 in Charleston, South Carolina to Sebert and Devera Adkins. He graduated from South Charleston High School in South Charleston, West Virginia and then the University of South Florida with a degree in business.

Darrell served in the United States Navy during the Vietnam War aboard the USS Intrepid.

After the military, he moved to Florida. Darrell began working for St. Petersburg Police as a patrolman and later retired from the department a detective in the homicide division. He then went on to become a probation officer and from there retiring again as a Captain for the Florida State Division of Insurance Fraud.

Darrell was a big-time Tampa Bay sports enthusiast, loving the Buccaneers, Rays and the Lightning.

Visitation was planned from 11 a.m. to noon, preceding the graveside service, in Inman Ward Funeral Home.