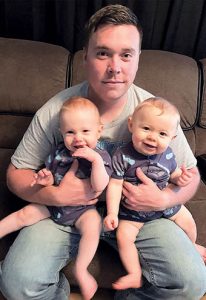 Born in Columbus County, he was the son of Randall Eugene Lemmons Jr. and Joanna Smith Lemmons.

He was a veteran of the U.S. Army and currently a sergeant with the Whiteville Police Department.

In addition to his mother, he is survived by his wife, Samantha Christian Lemmons, and two sons, Cayden Jace Lemmons and Christian Bryce Lemmons all of the home; one sister, Katilyn Lemmons of Whiteville; maternal grandmother Deborah Smith of Cerro Gordo; paternal grandparents Thrisia Egeland of San Diego, California and Randall Lemmons Sr. of Oklahoma; three nieces, Kyliegh, Summer, and Aleena; and two nephews, Dayton and Devon.

In addition to his father he was preceded in death by maternal grandfather Harrell Smith.

Visitation was planned from 6 to 8 p.m. Monday, April 25, in the Inman Ward Funeral Home Chapel.