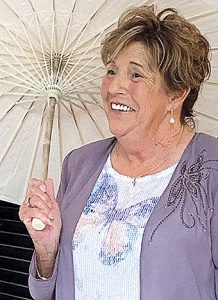 Born in Horry County, she was the daughter of the late Benjamin Ashley Worley and Betty Estelle Lovette Worley.

In addition to her parents, she was preceded in death by two brothers, Danny Lee Worley and Wayne Jacobs; as well as one sister, June Worley Perritte.

Visitation was planned from 6 to 8 p.m. Monday, Sept. 12, in Inman Ward Funeral Home.