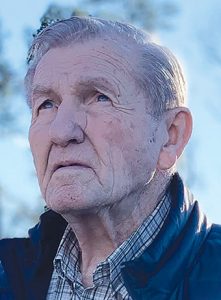 Bruce Harvey Jackson of Loris passed away on Thursday, Oct. 27, while visiting his daughter and her family in Nashville, Tennessee. He was 94.

Born April 30, 1928 in Green Sea, he was the son of the late Aubrey Brooks Jackson and the late Tressie Todd Jackson.

Mr. Jackson was preceded in death by the love of his life, Edna Stroud Jackson, in 2009. Mr. and Mrs. Jackson were blessed to celebrate 54 years of marriage.

Mr. Jackson served his country with courage, honor, and distinction in the United States Air Force. After the military, he cultivated his entrepreneurial spirit by starting, growing and then selling numerous successful businesses in the restaurant and beverage sector.

Mr. Jackson was a lifelong member of Green Sea Baptist Church and will be dearly missed by fellow church members, family, and numerous friends. Mr. Jackson was an encouraging father and was adored by his four grandchildren.

Visitation was planned for the hour preceding services at the church.