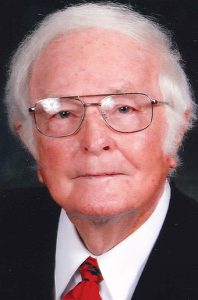 Rev. J.P. Jones of Tabor City died Monday, June 4, at Angel House Hospice in Whiteville, after months of declining health. He was 93.

Rev. Jones married the former Lynda Lou Pope in 1944, and she proved to be the needed foundation for his family while he executed his strong work ethic in ministry, business, charities, and farming before her death in 2006.

Jones’s various business interests include founding Jones Stores/J&C Wholesale Co. in 1954 which grew to more than 40 stores by 1999.

Rev. Jones also served on the Loris Hospital/McLeod Health Board for 25 years.

Farming proved to be a joyous business for Jones as he established a cattle herd and productive crop lands.

A funeral service was planned for 2 pm.. Wednesday, June 6, at Tabor City Baptist Church with the family receiving friends prior to the service beginning at noon.

Entombment was to be private.