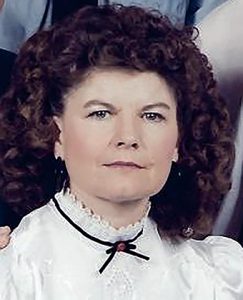 Diane Stevens Jones of Tabor City died Wednesday, May 29 in her home surrounded by those she loved and cherished. She was 74.

Born March 10, 1945 in Columbus County, she was the daughter of Elson Stevens and the late Retha Cox Stevens.

She is survived by her husband, Ferrell L. Jones, Sr. of the home.

Diane was the only child of Elson and Retha. Growing up, Diane’s father served in the military. The military lifestyle offered Diane the opportunity to travel the world and receive an education in such places as Thailand and Germany.

She had a love for culture, politics, writing, and was an avid reader, having read thousands of books in her lifetime.

Shortly after, Diane and her family were shipped back to the U.S. and she and Ferrell were married on Feb. 15, 1963. They settled in Augusta, Georgia, where Diane worked at the Medical College of Georgia.

She and Ferrell moved to Tabor City in 1972 where she helped establish the family business, Ready Motors, Inc. Diane also fulfilled her creative side as the owner of a local ceramic and clothing store called The Hob Nob.

She was a devoted volunteer and worker throughout the years in the Columbus County School System where she had a passion for helping children with exceptional needs.

Of all her accomplishments, her most proud was her family. She was a dedicated daughter, wife, mother, and grandmother and relished in putting their needs first.