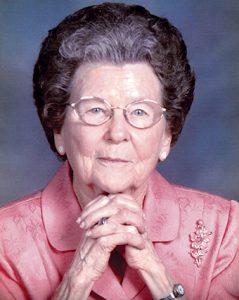 Ruth W. Ward of Clarendon in Columbus County’s Bethel Community transitioned to her heavenly home on Oct. 8, concluding a productive life of 96 years.

She passed from the earthly life at Lower Cape Fear Hospice Angel House in Whiteville, following a lengthy struggle with dementia and declining health.

Ruth was born April 6, 1923 to Elmer Forest and Sudie Whitman Wiggins in Calypso, Duplin County. After graduating as high school valedictorian, she worked in Wilmington where she met the love of her life, John C. “Jack” Ward, Jr. Upon her marriage to Jack in 1942, Ruth became a resident of the Bethel Community where she lived for more than 75 years as a notably active member of her adopted community centered around Bethel United Methodist Church. She and Jack had three children before he succumbed to cancer in 1969 at age 47, leaving Ruth with a 12-year-old daughter, Cathy, a college-senior son, Milton, and an Air Force officer son, David.

Ruth worked on the family farm and served for many years as a teacher’s aide at Williams Township and Hallsboro Elementary schools. She was active with the Columbus County Department of Aging, especially with the quilting program at the Bug Hill Senior Center.

Her daughter Cathy died in 2008 of complications due to chronic illness. Ruth also was predeceased by her two sisters, Hazel W. Peterson and Margaret W. Peterson of Wilmington, sister-in-law Marthalene Ward Inman of the Iron Hill Community, and many other relatives and friends.

She is survived by a sister-in-law, Beatrice Ward Gillette of Wilson, and a brother-in-law, G. Lupton Ward and wife Mildred of Wilmington.

Family planned to receive visitors in the church fellowship hall during the hour preceding the service.

Family expresses appreciation to Ruth’s church family that has been extremely faithful and supportive, especially during her period of disability. Family thanks the many dedicated staff persons at Liberty Commons Nursing and Rehabilitation Center for not only taking care of Ruth’s needs, but also truly loving her as a person. To Mrs. Juanita Nobles, Ruth’s roommate in recent years, the family sends a special “thank you” for her constant expressions of love, affection and concern for Ruth. Finally, the family is deeply grateful to the people at Liberty Hospice Services and at Lower Cape Fear Hospice for making Ruth’s final days comfortable and peaceful.