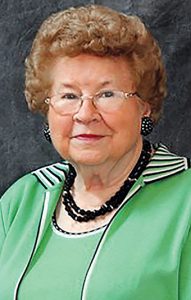 Margaret Elizabeth Suggs Prince of Loris passed away in her home Oct. 22, at the age of 93.

A native of Loris, Mrs. Prince was born on Dec. 24, 1925.  The daughter of Grover C. and Irene M. Suggs, she graduated from Loris High School as co-valedictorian of her class.  Always a trendsetter, she attended Columbia College where she was active in many clubs and organizations.  Mrs. Prince graduated in 1946 with an English degree and began her teaching career in Darlington.

In August of 1948, she married her high school sweetheart, Mr. E.W. Prince, Junior and moved to Clemson so that he could complete his degree.  While in Clemson, Mrs. Prince taught at the Clemson Calhoun School.   In 1950, the couple returned to Loris to assist Mr. Prince with the family business, Gurley Trading Company.  During this time, Mrs. Prince taught at the Loris Elementary School until her first child, Edward “Ed”, arrived followed thereafter by Margaret Elizabeth (Beth) and Robert Naugher.

During the years while raising her family, Mrs. Prince remained very active in church activities and local gardening clubs.  Alongside her husband she assisted in the management of the family businesses which included Gurley Trading Company, The Holiday House Motel, Cherry Grove Pier, Twin City Memorial Gardens, and the House of Antiques.

On the passing of her husband in 1982, Mrs. Prince assumed full responsibilities for these businesses, becoming the matriarch of both Loris and Cherry Grove.  An ever-present figure in the community, she oversaw the reconstruction of Cherry Grove Pier after Hurricane Hugo and was a partner in the development of Prince Resort at Cherry Grove Pier.  Though she loved the business world, her devotion to her children, Loris United Methodist Church, Trinity United Methodist, and other civic group activities were the cornerstone of her life.

Mrs. Prince was on the Board of Commissioners of Loris Healthcare and was instrumental in expansion to Seacoast Hospital in North Myrtle Beach.  She continued her service on the Board of McLeod Healthcare System upon their acquisition of Loris Healthcare.  She was also active in the Loris and North Myrtle Beach Chamber of Commerce.  Whenever asked, Mrs. Prince never failed to make a contribution to her beloved Loris and Cherry Grove.   Though humble, she was the recipient of many awards and recognition.  Named North Myrtle Beach Business Person of the Year in 2004, she was recognized with a Loris Life Time Achievement Award in 2007, and The State of South Carolina Life Time Achievement Award in 2008 awarded by the State Senate.

Visitation was planned from 5 to 7 p.m. Thursday, Oct. 24, at Hardwick Funeral Home.