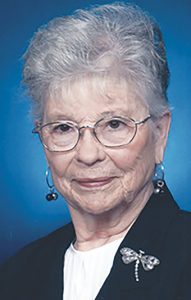 Joyce Garrell Young of North Myrtle died Wednesday, Oct. 23, surrounded by her loving family at Lower Cape Fear Hospice and Lifecare Center in Wilmington. She was 93.

She was born in Longs, on Oct. 23, 1926 to Henry Paul Garrell and Gladys Gore Garrell. Joyce entered and exited this world on the same date.

She was predeceased by her husband of 67 years, James Erskin Young; her parents; and grandparents, Henry Cephus Gore and Mattie O’Quinn Gore.

She leaves behind three children who were all her favorites. They are: Brenda Young Singletary, of North Myrtle Beach; James Erskin Young II (Jaey) and his wife Pam of Louisburg; Martha Ann Young Gordon and her husband, Dan, of Ocean Isle Beach.

Six grandchildren who will miss their MeMa/Granny Y. They include: Claire Young (Bee), of Louisburg, David Singletary (Emily) of Portsmouth, Virginia, Chip Young (Brittany) of Louisburg, Brian Gordon (Samantha) of Durham, Trevor Vaughan (Kayla) of Four Oaks, and Grace Gordon of Greenville. She also had two great-grandchildren, Ellie Young of Louisburg and Lily Gordon, of Durham with the Young twins due in February.

Mrs. Young was a product of the Tabor City Schools and upon graduation attended Hardbarger Business College in Raleigh and then attended Wake Forest College.

She was employed for 21 years at Tabor City Primary School where she worked mostly in grades one and two. She touched the lives of hundreds of children during these years. The children adored “Miz Young” and learned so much from her.

When living in Tabor City, she was an active member of Tabor City Baptist Church where she sang in the choir, taught Sunday School, and worked with the GA’s and WMU.

She was a past member of the Dirt Daubers Garden Club. In the 1950s she was the chairman of the committee for obtaining bands for the Yam City Festival.

Mrs. Young was also Vice-President of the PTA. Other memberships included the Tabor City Woman’s Club and the Order of the Eastern Star #240. She also served as a den mother for the Boy Scouts.

In 1989, Joyce and Erskin retired to their beach cottage in the Windy Hill Beach section of North Myrtle Beach. She was the family’s hummingbird expert. Most of her time was spent babysitting for her beloved grandchildren while their parents traveled.

Joyce and Erskin enjoyed taking 26 cruises and visiting five continents together. She was a current member of the First Baptist Church of North Myrtle Beach where she attended Nifty Fifties and her Sunday school class.

Her children rejoice that their mother is now pain-free!

A celebration of her life is planned for 3 p.m. Sunday, Oct. 27, at Tabor City Baptist Church in Tabor City. Visitation was planned during the hour preceding the service in the church.

In lieu of flowers, the family ask that donations be made to Lower Cape Fear Hospice, 1414 Physicians Drive, Wilmington, NC 28401.