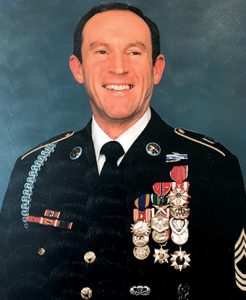 James Darrell Vaught of Loris passed away on Saturday, Dec. 14,  at his home following an illness. He was 73.

Mr.Vaught was born on March 16, 1946 in Loris, SC, to the late Lundy Monroe Vaught and the late Flora Anderson Vaught. He was a loving husband, father, grandfather, brother, friend and longtime member of Olyphic Baptist Church in Tabor City.

Upon graduating from Loris High School, Mr. Vaught joined the United States Army in 1964 and served his country with courage, honor, and distinction in the Vietnam War. He was later stationed at Fort Myer, Virginia, where he served as First Sergeant of the Honor Guard, commanding the United States Army Drill Team in ceremonies at the White House and Arlington National Cemetery. He also had the distinct privilege of serving as the Sergeant of the Guard for the Tomb of the Unknown Soldier as a member of “The Old Guard” of the Army.

His final military post was as a Non-Commissioned Officer at West Point, where he helped mold young cadets to be fit for service.

After retiring from the military in 1986, Mr. Vaught went on to earn an Associate’s Degree in Criminal Justice and joined the Fraternal Order of Police, serving as  a proud officer of the Supreme Court of the United States Police Department from 1988 until his second retirement in 2003. Through his career and into retirement, he was always dedicated to the task, striving to achieve The Old Guard’s famous standard of perfection in everything from the execution of his military duties to the manicuring of his lawn (his final, unofficial post).

Off duty, Mr. Vaught (known equally as Jim, Darrell, or “Doc”) was a history buff, an avid traveler and outdoorsman, a sports enthusiast, choir singer and family man.

In addition to his parents, Mr. Darrell was predeceased by his son, Kevin Vaught and his brother, Rev. Paul Heyward Vaught.

Visitation was planned from 6 to 8 on Friday, Dec. 20, at Hardwick Funeral Home.

Committal services, with military honors, at Arlington National Cemetery will be announced at a later date.

A story of Mr. Vaught’s military service as published in The Loris Scene may be found here.