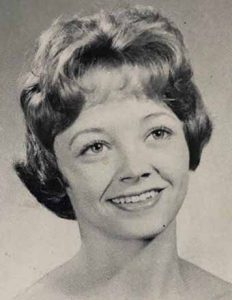 Geraldine Eddings Muller of Peachtree City, Georgia died after an acute and prolonged illness at 2:11 p.m. on Saturday, March 14, surrounded by Steven, her husband of 45 years, and her son David.

Born on Oct. 28, 1942, in Mullins, to Charles and Clara Eddings of Tabor City, Gerri graduated from Tabor City High School in 1961. In 1964, she graduated from the McLeod Nursing School in Florence, then moved to California. After a brief stint as a flight attendant for Eastern Airlines in Atlanta, Gerri joined the United States Navy in 1972 and served as a lieutenant at the Naval Hospital at Camp Lejeune, where she met and married Steven Anthony Muller on Jan. 24, 1975, before giving birth to one son – David – in March of 1977.

A devoted wife and loving mother, Gerri became an avid world traveler as a result of years living in the Washington, D.C. suburbs followed by various “tours” in Great Lakes, Illinois, Okinawa, Japan, and London, England. Gerri also lived in upstate New York and rural Iowa, then she and her husband retired to Jonesboro in Clayton County, Georgia, in January of 2000.

Loved by many as a sister, an aunt, a grandmother and as a friend, Gerri will be remembered as a courageous woman who stood straight up to adversity and hard times, and as someone always steadfast and ready to stand by our sides through the toughest of times. She will be remembered as a formidable woman who put up one hell of a fight for her life and for her family. She also made a delicious noodle kugel.        Gerri is survived by her husband Steven and her children Laura, Abby and David; and by her brother Walter Eddings and his wife Mary Lou, and by her grandchildren Benjamin, Annie, Jacob and Suzanna Blue.

Gerri was predeceased by her older brother, Kenneth Eddings, who died in 2007.

A funeral/memorial service for Geraldine Eddings Muller will be arranged for a later date.

In the meantime, and in lieu of flowers, donations in Gerri’s honor and memory can be made to Congregation B’nai Israel in Fayetteville, Georgia, here and to the Wounded Warrior Project here.