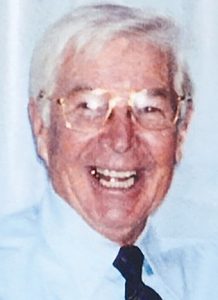 John James Gore of Jacksonville, Florida, went home to be with his Lord on Thursday, June 4, at his residence. He was 88.

Mr. Gore married his soul mate Flora Belle Gore on June 28, 1953 in Tabor City at Old Zion Methodist Church. They had lived in Jacksonville since 1959.

He was the son of the late Roland Roundtree “Buck” Gore and Susan Frances Long Gore.

Mr. Gore was a beloved husband, dad, brother, uncle, grandpa and Pa John. He attended Guideway School in Tabor City as well as Armstrong Community College in Columbia, South Carolina where he earned a degree in Business Administration.

Mr. Gore was a board member of The Florida Farm Bureau, Dinsmore United Methodist Church and The First Church of the Nazarene. He attended both The Church of the Nazarene and Dinsmore Methodist Church where he taught Sunday School. Mr. Gore loved to sing. His favorite hymn was Blessed Assurance Jesus is Mine. His favorite Bible verse, and one that he lived by, was Romans 8:28 “And we know that all things work together for the good of them that love the Lord”.

He is survived by son, Johnny and his wife, Chery; grandchildren Joshua (Stepheny) and Carissa; his favorite companion, his cat, Blue, all of Jacksonville; a very special niece, Sylvia (Duane) Harrelson, their daughter, Amanda (Tommy) Templeton; great-niece and nephew, Savannah and Jacob, all of Statesville.

A memorial service was planned for 10:30 a.m. Monday, June 15, at The Isaac Gore Cemetery in Tabor City.