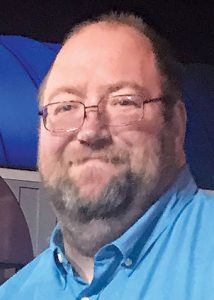 Steven Eugene Planty, of Davenport, Iowa, passed away on June 7. He was 46.

Steve was predeceased by his father, Steven R. Planty.

Steve is survived by his wife of 25 years, TheOdocia (Teddie); daughters Kayla and Courtney, son Joshua, granddaughter Isabella, mother Anna, sister Tamera and her husband Patrick Cooper, all of Loris; and several nieces and nephews.

Steve was born in Potsdam, New York on April 3, 1975. He graduated from Laurel High School in 1993 and received his Associate’s Degree in Criminal Justice from Kaplan University several years later.

He started this career by being a forklift driver for the Postal Plant in Capital Heights, Maryland. He then went on to a window clerk in Shady Side, Maryland. Years later he moved with his family to Loris, where he continued to work as a mail clerk. After 23 years he chose to retire from the Postal Service.

Steve was an avid reader and movie enthusiast. He also enjoyed debating sports with his son and brother-in-law. He loved spending his time showing his knowledge of useless facts while watching Jeopardy and during family game nights. He did think he always had to be right and proved it whether it was to doctors or family (he was usually right). He enjoyed spending time with his wife, going to the gun range, and going for rides on his motorcycle. He also enjoyed his time with his granddaughter and niece, whether it was watching them play or watching a movie together. He was a family man.

Steve was a proud member of Loris First Baptist Church where he was baptized in 2018. In the end, he relied heavily on faith and family.

Visitation was planned from 6 to 8 p.m. Friday, June 18, at Hardwick Funeral Home.

Steve loved the saying “Never tell me the odds” and he lived his life in such a way.