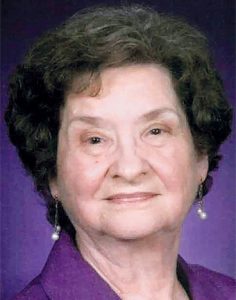 Vera Ward Waddell of Tabor City, widow of Eldred (Sappy) Waddell, passed away peacefully at Shoreland Healthcare and Retirement Center of Whiteville on Feb. 5. She was 88.

She was a 1952 graduate of Tabor City High School. After graduating she was employed by Southern Bell Telephone, where she worked for ten years before leaving to become a full-time homemaker and mother to her two daughters.

She was a member of St. Paul United Methodist Church, where she was a member of The Sunshine Circle. She was known for her infectious smile and laughter which would light up any room. Her kind and sweet spirit will be missed by many.

She is survived by two daughters, Robin Wilson (David) of Tabor City and Wendy Yount (Greg) of Asheville; three grandsons, Alec Yount (Emily) of Morganton, Colin Yount of Atlanta, Georgia, Tanner Wilson of Tabor City; one granddaughter, Sloane Yount of Asheville; a special niece, Pat Moore of Florence; a sister-in-law, Katie Ward of Myrtle Beach; and many other nieces and nephews.

Visitation was planned from 1 to 2 p.m. Saturday, Feb. 12, at Inman-Ward Funeral Home in Tabor City.

Due to COVID-19 in the community, family requests that masks be worn.