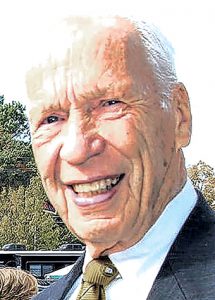 Richard “Dick” Franklin Taylor of Lumberton passed away peacefully of natural causes at this home on May 11, surrounded by his wife and family. He was 94.

Mr. Taylor was born on February 24, 1928, in Quakertown, Pennsylvania. Mr. Taylor, whose father was an insurance executive, moved frequently as a child, ultimately settling in North Carolina in 1943.

Mr. Taylor attended the University of North Carolina at Chapel Hill from 1945 through 1950 and was an NCAA Division I Hurdles World Record holder as a star track and field athlete at UNC.

After graduation from UNC, Mr. Taylor moved to Lumberton and purchased what would become Taylor Insurance in 1952, where he worked for more than 70 years until shortly before his death.

Mr. Taylor was an avid car enthusiast, at one point, owning over 60 original and restored antique vehicles. Additionally, Mr. Taylor, a philanthropist, was a benefactor to the University of North Carolina at Pembroke and the University of North Carolina at Chapel Hill, where he served on the Board of Governors for the UNC System and the Board of Trustees for UNC at Pembroke.

Mr. Taylor was a long-serving Vestry at this church, Trinity Episcopal Church in Lumberton. He has countless Senior Olympic medals and awards, and the indoor track at UNC-Chapel Hill and the outdoor track at UNC Pembroke are both named after Mr. Taylor. He was awarded The Order of the Long Leaf Pine on April 29, 2022, and also received the highest honor bestowed by the North Carolina Department of Insurance, The Order of the Guardian.

Visitation for Mr. Taylor was planned from 6 to 8 p.m. Saturday, May 14, at Boles-Biggs Funeral Home in Lumberton.

A funeral service was planned for 2 p.m. Sunday, May 15, at Trinity Episcopal Church in Lumberton. Burial will be private.