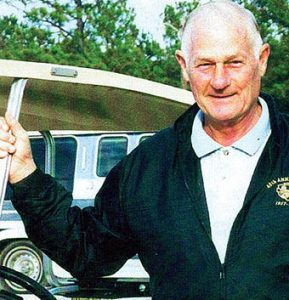 Herman Devon Spivey, Sr. of Loris passed away on Wednesday, Aug. 10, at McLeod Hospice House in Florence. He was 91.

Born Jan. 28, 1931 in Loris, he was the son of the late Victor Grantham Spivey and the late Retha Mary Prince Spivey.

Mr. Spivey served our country with courage, honor, and distinction in the United States Air Force and the United States Army. He left school after the 11th grade to serve in the Air Force for two years. He returned after those two years to finish his 12th grade year. Mr. Spivey then went to Chicago to attend electronics school. Afterwards, he joined the Army for a five year term. He was 1st among the Army’s marksmen. He served at Fort Gordon as instructor for the communication specialists headed for Vietnam.

Mr. Spivey retired from the FAA as an electronics technician. In his later years he invested himself in his love of golf by managing and working Carolina’s Country Club of which he became the majority owner.

Mr. Spivey was also a dedicated scout leader, and proud member of the V.F.W. in Little River and the American Legion. He was of the Baptist faith and a member of Loris First Baptist Church.

Family planned to receive friends during the hour preceding the service at the funeral home.