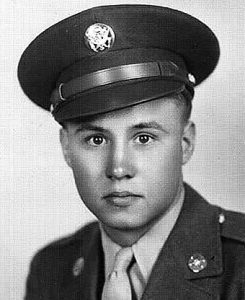 He was born March 6, 1925, in Wilmington, NC, a son of Ollen Onslow and Nellie Huffaker Watts.

A graduate of Tabor City High School, he entered US Army service in 1943 and after finishing Advanced Infantry Training was assigned as a rifleman in the 385th Infantry Regiment, 76th Infantry Division, part of Patton’s Third Army.

He suffered severe shrapnel wounds from German artillery on Feb. 19, 1945 and was evacuated to a hospital in England. He earned the Purple Heart, the Bronze Star, the Combat Infantry Badge, and the National Defense Service Medal.

After the war he began a 40-year career with the US Postal Service as a rural letter carrier. He and his wife, Gracie, enjoyed taking their children on many camping trips during the summers.

He was a long-time member of the New Life Missionary Baptist Church in Tabor City and served many years as a deacon, treasurer, and song leader.

In their retirement years they enjoyed working in the yard and garden together, and attending auctions.

He was preceded in death by his parents; his brother, Bennie Watts; his sisters, Geneva Watts Dyches and Bernice Watts Joyner; and a daughter, Melissa Grace Watts.