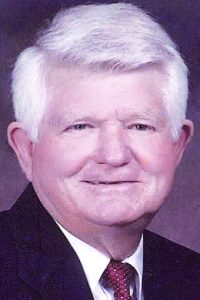 Walter Harold Hughes of Tabor City passed away peacefully and surrounded by his loving family at MUSC Medical Center in Charleston, on July 5. He was 74.

Harold was born in Horry County, SC on Jan. 2, 1943, the son of N.G. and Marie G. Hughes. He was reared in the Pireway Community alongside his beloved brother, Ned Hughes, and his dear sister, Susan Schilling.

He was a graduate of North Carolina State University where his lifelong devotion to all Wolfpack sports began. He was the fan you called when you needed to be reminded why the Pack should still be your team too.

After college, he returned home and married the love of his life, Sylvia Gore Hughes. She was a devoted wife for 49 wonderful years. They both were educators.

Harold Hughes was the vanguard in his classroom sharing his knowledge and skills of leadership with young boys and girls in his Agri-science classes at both Tabor City High School and South Columbus.

Using the FFA infrastructure he developed his own curriculum to mold, shape, guide and forge the young people that would consider him their FFA Advisor and teacher.

Throughout his 33 years as a classroom teacher of Agricultural Education and FFA Advisor, Harold impacted many young men and women that would later become very successful community and business leaders.

Many of his former students are now, leaders, teachers and directors in what he considered to be the most rewarding career choice, education. Countless students would become entrepreneurs, business leaders, community leaders, healthcare professionals, hospital administrators and educators that would and continue to practice the business and leadership skills Mr. Hughes taught them as students in his Agri-science classes. He trained countless Parliamentary Procedure teams, Tool Identification and Usage teams, Prepared and Extemporaneous Public speaking as well as Creed speakers. He instilled in his students the desire to not just participate, but the desire to excel. Most of his FFA teams would surpass not only the local, federation and district competitions, but would overshadow others in State Level competitions as well.

To ensure the legacy of his passion would continue for future generations, Harold welcomed many student teachers into his classroom over the years. Through his mentor ship, some of these went on to become teachers of agriculture, others would help define the many facets of Agriculture and eventually become Ag Extension Agents, bankers and even National leaders in the National FFA Organization.

Harold’s immortal passion for Agriculture will live on for many generations as his seeds of love, respect and admiration he planted every day in his classroom continues to grow and flourish in those students that he inspired throughout his teaching career.

Harold was a faithful member of Tabor City Baptist Church where he was honored to serve as a deacon for many years. He was a humble man with a true heart for God. As a young man he read the Bible every day and continued his walk as a Sunday school teacher and a witness for Christ. He had a heart that was kind and loving and a soul equally as merciful and beautiful. He understood the depths of human compassion and was not afraid to speak up for the less fortunate.

Harold was a community servant and served as a city councilman in Tabor City for 15 years.

He led an exciting life. He enjoyed flying airplanes, loved Scottish terriers, and could always charm everyone with his version of Boogie Woogie on the piano. Some of his best days were spent rocking on his front porch watching the waves roll in at the beach.

Nothing made Harold happier than his family. He was blessed with a daughter, Jennifer Williamson (Greg) and two sons, Whitney Hughes (Kelly) and Justin Hughes (Amber – fiancé). His best title, Granddaddy, had yet to be earned until the birth of his granddaughters Mary-Gregg Williamson, Maggie Williamson and Mazie Hughes.

Though he may no longer be with us on this earth, we know that he is with the Lord. His legacy will be his faith in God, love for his family and passion for life.

Visitation was planned from 9:30 to 11 a.m. Saturday, July 8, in Tabor City Baptist Church.