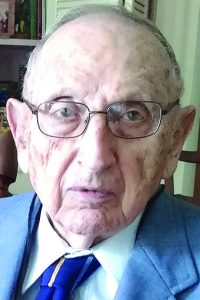 Claude “Elwyn” Harris died peacefully in his home in Chadbourn, surrounded by family and caregivers, on July 15. He was 97.

Elwyn was born on Sept. 6, 1919 in Elizabeth City, to Claude Leon Harris and Annie Elizabeth Stafford Harris. He graduated from Central High School in 1937. In 1941, he enlisted in the Coast Guard, was taken aboard ship and bypassed “boot” camp.  Upon his return to civilian life in Elizabeth City, he met Virginia Carolyn Bailey. They married on Christmas Day in 1946. They moved to Chadbourn in 1949, when they began working the Bailey family farm. In addition to maintaining his farming duties, Elwyn began working for the United States Department of Agriculture in 1957 as a field analyst. He worked on the USDA’s Carolinas Witchweed Eradication Program until his retirement in 1987. Over the years, he took on many roles within the community, including serving as a deacon at Chadbourn Baptist Church and as secretary and treasurer of the Columbus County Drainage Commission.

Elwyn provided steadfast stewardship not only for his family, community, and church, but also to the land he worked and the friends and co-workers he saw daily. He could be seen driving his tractor to maintain his garden well into his 90s, and he was known for sharing his garden’s bounty with his neighbors. He took particular pride in his native town of Elizabeth City and its people, yet he loved Chadbourn as his own adopted home. He was honored to have served in the Coast Guard during World War II. His children will remember him for the guidance he provided them and his willingness to let them make their own choices as they grew.

He is preceded in death by his wife Virginia “Ginny” Carolyn Bailey Harris; his brother William Stafford Harris of Elizabeth City; and his two sisters Elizabeth Harris Simer of Hooker, Oklahome and Margaret Ann Harris Waters of Elizabeth City.

Final rites were to follow at 11 a.m. with Reverend Dr. Danny Russell officiating. Interment was to follow in Chadbourn Memorial Cemetery.

The family would like to thank Lower Cape Fear Hospice for the comfort they brought, as well as Jackie McQueen and Loretta Johnson for the loving and exemplary care they provided in Elwyn’s last few years.