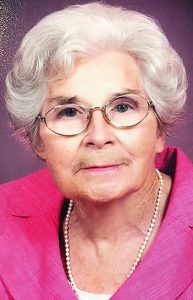 Lorena Hardee Fowler passed away Saturday, Sept. 9, in her home in Florence. She was 89.

Born Feb. 25, 1928 in Horry County, she was the daughter of the late Henry Monroe Hardee and Hettie Dozier Hardee and the widow of Alvard Russell Fowler.

In addition to her parents and husband, she was predeceased by four brothers, Woodrow Hardee, Crance Hardee, Arthur Hardee, Huger Hardee; and one sister, Vivian Singletary.

Ms. Lorena, as she was often called, was a devout Christian. She loved flowers and being outside in her yard. She was a devoted wife, loving mother, grandmother and great grandmother. Those who knew her were touched by her humble kindness and generosity towards others. She was a gentle woman with great virtue and strength.

In lieu of flowers, memorials may be made to Unity Baptist Church, 2990 Pamplico Hwy, Florence, SC 29505.