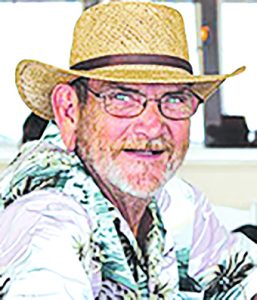 Tracy Lynn (T.L.) Hodge of Elizabeth City, and born and raised in Loris, died Thursday, Oct. 12, surrounded by his family. He was 66.

Tracy was a marine pipefitter for twenty-five years at the Norfolk Naval Shipyard, Shop 56. He could build just about anything. T.L. was a “good ole boy” who would help anyone in need.

He loved fishing, NASCAR, Duke Basketball, Carolina Panthers, and spending time with friends and family. He was very patriotic and often answered the phone by saying “Hello my fellow American.” He was very proud of his grandsons (Joseph and Jordan) currently serving in the U.S. Army. T.L. had a great sense of humor and would always have you laughing most of the time without even trying.

The family would like to thank the Baptist Men, third floor nurses of Sentara Albemarle, especially Corey, Kindred nurses and physical therapist, and Hospice nurses and staff of Elizabeth City.

A private service will be held in Tabor City at a later date.