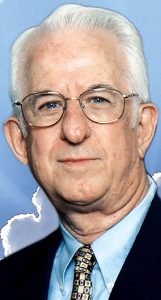 Edward Carlisle Suggs of Loris passed away Monday, May 28, at McLeod Loris hospital following a five and one-half year battle with cancer. He was 83.

Born Dec. 22, 1934 in Loris, he was the son of Mr. Grover Cleveland Suggs and Mrs. Irene Mullinnix Suggs. His early years were spent working at his father’s grocery store and on the family farm. After graduating from Loris High School, he attended the University of South Carolina then enlisted in the U. S. Air Force where he served honorably as a radar operator attaining the rank of staff sergeant. Following his military service, Mr. Suggs returned to Loris working at Suggs Red & White Grocery Store. In 1966, he began a career as a sales representative for the Procter and Gamble Company, retiring in 1993.

Always interested in aviation, he began flying lessons in 1957 piloting his first solo flight at age 22 and earning his private pilot’s license.

Mr. Suggs was a volunteer with the Boy Scouts of America, serving first as a member of the Troop Committee of Boy Scout Troop 847 and then as Scoutmaster. He served on the staff of the 1977 and 1981 National Boy Scout Jamborees and led an expedition to Philmont Scout Ranch in New Mexico. The Pee Dee Area Council presented to him the Silver Beaver Award, its highest award for service to the community and scouting youth, in 1982. He was proud of the young men he mentored through the scouting program, especially those that reached the rank of Eagle Scout.

He also was active in Lions International, serving as secretary and president of the Loris Lions Club and as cabinet secretary for District 32-C of the South Carolina Lions Club.

Mr. Suggs was appointed to the City of Loris Zoning Board of Appeals in 1976 and served until 1985 when he was elected to the Loris City Council where he served as mayor pro-tempore.

He was a member of Loris First United Methodist Church and previously served on the Administrative Board, the Board of Trustees, as an usher and a delegate to the South Carolina Annual Conference. He received the Cross and Flame Award for outstanding service to children and youth of the Methodist Church.

Visitation was planned from 6 to 8 p.m. Thursday, May 31, at Hardwick Funeral Home of Loris, and again from 1:00 p.m. until 1:45 p.m. on Friday, June 1, at Loris First United Methodist Church Fellowship Hall.