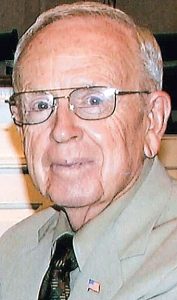 Claudius Edmond Huggins of Tabor City was born to Ira B. and Margaret McQueen Huggins of Green Sea.

On July 16, 1948, Claude married Avie Lee Herring of Loris and they enjoyed 65 years of marriage until Mrs. Huggins death in 2013. They were the parents of three sons who survive: Claudius Edmond Jr. (BJ) of Cary, Randy (Pam) of Southport, and Dennis (Jan) of Wilkesboro.

He graduated from Green Sea High School in 1939, Mars Hill College in 1941, and Furman University in 1943. Claude served in the U.S. Air Force as a Tech Sergeant from 1943-1945, serving as a gunner based in southern Italy. He was awarded the Overseas and Victory Medals, the EAMET medal with three bronze stars, and the Purple Heart.

Claude was a buyer and salesman with W.F. Cox Company of Tabor City from 1945 until his retirement in 1985. He was a member of the Tabor City Rotary Club and was named a Paul Harris Fellow in honor of his Rotary contributions.

Visitation was planned for the hour prior to the service in the church.

Family respectfully request no food or flowers. Memorials may be made to Tabor City Baptist Church at 200 Live Oak Street, Tabor City, NC 28463.