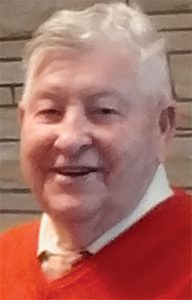 Ralph Meares of Burlington, and formerly of Tabor City, died Wednesday, Oct. 31, at his residence.

Mr. Meares was born in Columbus County on June 20, 1933 and was the son of the late Rowland Jason and Ethel Sealey Meares.

He was also preceded in death by an infant daughter, Nora Luann Meares.

After serving for two years as a Private First Class in the US Army, stationed at Fort Belvoir, Virginia, Ralph attended Durham Barber Institute in Durham.

He married Josephine Hayes on July 11, 1959, after which they established residency for two years in Fayetteville. They returned to Tabor City where Ralph maintained Ralph’s Barber Shop for 54 years. He could often be found on the corner of Fifth and Main Streets in Tabor City conversing with town residents and numerous friends.

Ralph loved people and so enjoyed rich conversations, never meeting a stranger. He was also known for his kindness and generosity as well as a captivating, contagious smile.

Ralph was a loving husband and father, as well as a devout Christian servant. He was often called upon to deliver eloquent and meaningful prayers of blessing and thanksgiving to a God whom he devoutly loved and worshiped.

A celebration of his life was planned for 2 p.m. Saturday, Nov. 10, at Macedonia Lutheran Church with the Rev. Richard Goeres presiding, interment following at Alamance Memorial Park following the completion of the Service of the Resurrection.

Family planned to receive friends and relatives during a short visitation to be held in Luther Hall prior to the service from 12:30 to 1:30 p.m., with light refreshments to be served.

In lieu of flowers, memorial gifts may be made to the Music Memorial Fund at Macedonia Lutheran Church, 421 West Front Street, Burlington, North Carolina 27215.

Family would like to express its sincere gratitude to the staff and volunteers at the Adult Day Program at Twin Lakes Community, to Dr. Mark Miller and staff of Kernodle Clinic, and to Hospice of Alamance-Caswell.