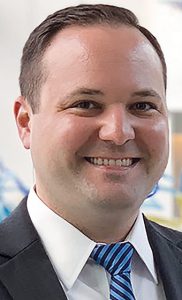 MacMillian “Rea” Grainger of Atlanta, Georgia, and formerly of Chadbourn and Holden Beach, passed away on Monday, May 27. He was 31.

Rea was the son of Barry Rea Grainger of North Myrtle Beach, and the late Annette Brown Grainger.  He is the grandson of the late F.M. Sr., and Ethel Williamson Brown and Dennis Rea and Carolyn Boyd Grainger of Chadbourn.  Rea was also preceded in death by an uncle, F.M. Brown, Jr.

Rea graduated from West Brunswick High School and attained a Bachelor of Arts degree in International Studies from The University of North Carolina at Chapel Hill.  While in high school, Rea had the opportunity of participating in two dynamic learning experiences at Presidential Classroom in Washington, DC, and being a member of the inaugural class at Martha Guy Summer Institute for future business leaders at Appalachian State University.

After college, Rea spent his career working as a healthcare consultant focused on improving access to care and operational efficiencies across the United States.

Rea continued to expand his early interests in globalization and international commerce in his attainment of a Master of Business Administration in Global Business from Georgia Institute of Technology.

Rea absolutely loved traveling, in addition to learning from other cultures, and based his travel experiences on the late Anthony Bourdain through his unwavering desire to make the world a smaller place and to foster understanding among diverse peoples and cultures through food.  He had the opportunity to study at the National University of Singapore while in college as well as Beijing University of Posts and Telecommunications during graduate school.  Additionally, he traveled to many parts of the world with some of his closest friends and travel companions.

Outside of traveling, Rea loved cooking, visiting wine regions, scuba diving, and being involved in the lives of family and friends.  He was always known for his unwavering desire of learning from and ability to connect with people across many differing perspectives, both personally and professionally.

In addition to his father, Rea is survived by his brother Revis Long (Allisia) of Whiteville;  his uncle Larry Grainger of Holden Beach; his aunt Jeanne Ivey (Harold) of Fletcher; his aunt Brenda Brown of Wilmington; cousin Adrienne Roberson (Matthew) of Fletcher; cousin Jena Burkhart (Craig) of Chapel Hill; cousin Tyler Grainger of Cerro Gordo; cousin Macky Brown (Becky) of Wilmington; great aunt Betsy Grainger of Tabor City; and great aunt Patsy Cadieu of Middleton, Tennessee; as well as numerous special and life-long friends that he met throughout his various travels and experiences in life.

A private memorial service will be held at a later date upon the creation of an Eternal Reef memorial that will be placed off the North Carolina coast and will be part of an artificial reef program to support the preservation of marine environments.