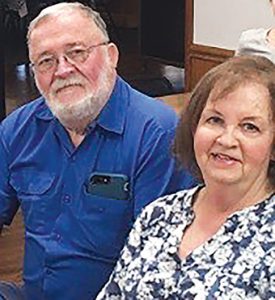 Lake Howard, Jr. of Clarendon transitioned to his heavenly home Tuesday, Jan. 7. He was 73.

He was a servant of humility and self-sacrifice.  He was employed by DuPont for 31 years where he worked as an Industrial Mechanic.  He was a man of many talents; knife maker, videographer, photographer. He made hundreds of videos and photographs for weddings, dance recitals and graduations. He was a five time World Champion Wooden Decoy Duck Carver. He was known as the chewing gum and candy man.

He also was a loyal member of Sweet Home Baptist Church where he served as the chairman of building and grounds, gate keeper, and made church videos for twenty years.

He is survived by his wife, Judy Stanley Howard of the home; three sisters, Carol Hill of Fayetteville, Nell Cottle of Beulaville, and Ruth Smith of Deep Run; two sisters-in-laws, Jean Stanley Simoneau and husband Arthur of Tabor City, and Cynthia Howard of Albertson; nephew, Zac Simoneau and wife Jaclyn of Wilmington; and several other nieces and nephews.

He was predeceased by his parents, Lake Howard, Sr. and Fronnie Casper Howard; and one brother: Kenneth Howard.