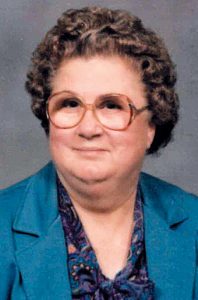 Wilda Formyduval Long of Nakina was welcomed into her eternal heavenly home on Tuesday, Sept. 8, after a three-week hospital and rehabilitation stay due to a fall in her home. She was 91.

Wilda was born July 25, 1929 to Maceo McCoy and Carrie Lovia Formyduval of Nakina. She and her two younger sisters, Bernice and Ruth Helen were very musically talented and sang at WENC radio station and in local churches during the 1940s.

After graduating from Whiteville High School, she attended Emmanuel College in Franklin Springs, GA and later worked as a bookkeeper at Whiteville Cold Storage.

On Sept. 29, 1951 she married the love of her life, Floyd Lenard Long, of Nakina. Together they worked the farm and raised two daughters, June and Pam.

After Floyd succumbed to complications with diabetes in 1972 at the age of 41, Wilda began a new career as a United States Postal employee, working at the Nakina Post Office and worked until her retirement in 1994.

A faithful Christian, she used her musical gifts serving as a church pianist and choir member until her mobility diminished in her later years.

Wilda was predeceased not only by her husband, Floyd; but also by her daughter June Long Jacobs; her father and mother, Maceo and Lovia Formyduval; and her sisters, Bernice Stone of Charleston and Ruth Helen Stanley of Nakina.

Family expresses a deep appreciation to all those who have supported Wilda over the last few years, and thanks the owners, McCoy and Phyllis Gore and the staff of Southern Table Restaurant and her lunch buddies Joyce Ward and Pam Reynolds, Wilda’s church family at Dulah Baptist Church, the Nakina Rescue Squad for their transports, Crystal Butch and the staff of A New Beginning Home Care, and the doctors, nurses, and CNAs on the sixth floor of Columbus Regional Healthcare.