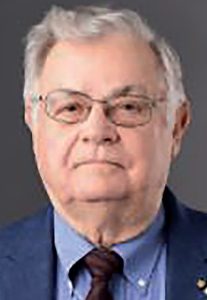 Allie Maitland Smith passed away peacefully at his home in Fearrington Village on Nov. 21, surrounded by his family. He was 87.

His family had gathered to be with him in his month-long battle with an aggressive brain cancer.

Maitland was born in Lumberton in 1934 to Allie McCoy and Emma Wright Smith. He grew up in Tabor City and graduated from high school in 1952. His parents instilled a love of learning and the importance of education. He attended North Carolina State University where he graduated with honors in Mechanical Engineering in 1956.

Once he received his PhD, he accepted a position as a research supervisor at Arnold Engineering Development Center in Tullahoma, Tennessee in 1966. Always a teacher at heart, he became an adjunct professor at the University of Tennessee Space Institute.

In the aerospace field, he is well known for his discovery of the anomalous refraction maxima phenomenon. His research and experience led to his appointment as Dean of the Engineering at the University of Mississippi in 1979.

He is also survived by his two sisters, Judith S. Greene and Jane Smith Patterson (Henry); and his nieces and nephews.

A private family memorial service will be held at the Bald Head Island Chapel on Dec. 22.

In lieu of flowers, donations may be made to the Village Chapel of Bald Head Island here, the GBM foundation here, and the Chatham Transit network here.