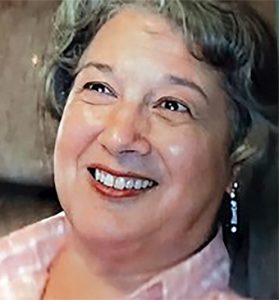 Rosanne was born Feb. 13, 1945 in Brooklyn, New York, the daughter of the late Matthew Gambuzza and the late Bernice Gambuzza.

She began her career working for Washington Gas Light Co. in DC in 1965 and retired to Loris in February 1997 after 32 years of service.

Rosanne never met a stranger. She never walked away from life’s challenges. She carried through on several items on her bucket list and that was to take up fencing and always loving theater, decided to try out for some minor parts at the Theater of the Republic, which she earned.

Rosanne always gave it 110 percent in anything she did.

She became an active member of the Loris Garden Club in September 2002 and considered the members as extended family. She was a voracious reader – always having numerous books waiting for the next book to red.

Rosanne always looked forward to Rev. Grady Corder’s sermons and Bible studies. She had many Bible commentaries and Bible translations she used in her personal studies to gain a greater understanding of God’s word.

Rosanne’s bright smile and sparkle in her eyes were reflective of her cheery personality.

There will be a Celebration of Life at a future date.