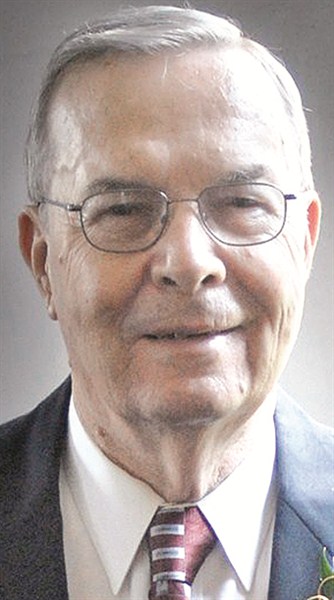 James Willard Fowler: Nakina of Nakina died Friday, Jan. 25, in Columbus Regional Healthcare in Whiteville. He was 82.
He was born Sept. 21, 1930 in Nakina to the late Needham and Darcus Fowler.
He is survived by his wife of 57 years, Jeanette Stanley Fowler, formerly of Ash; his son Steve Fowler; his daughter-in-law Amy Fowler; two granddaughters, Emma Caroline Fowler and Anna Elizabeth Fowler;
He was predeceased by two sisters, Annie Harper of Tabor City and Gladys Wilson of Whiteville.
An Armed Services Veteran, Fowler served in the U.S. Army in the 1950s stationed primarily in Germany. He also worked with the Holsum Bakery in the 1950s as a deliveryman. In the early 1970s, after working for years at National Spinning Company Inc. in Whiteville, he was named personnel director, a position he would hold until 1992. Fowler retired as human resources manager after working 31 years for the company.
Fowler was active in community and church matters. He was a long-time Deacon and 20-year Sunday school Superintendent at Seven Creeks Missionary Baptist Church in Nakina. He also was involved with the Nakina VFW chapter and Nakina Rescue Squad for several years. His favorite motto was “The road to success is always under construction.” His favorite KJV Bible verses were John 14:2-3.
Fowler’s wife also worked at National Spinning Company and served later as human resources manager at Kmart in Whiteville.
Visitation was planned from 6 to 8 p.m. Sunday, Jan. 27, in Inman Funeral Home in Tabor City.
Funeral services were planned for 2 p.m. Monday, Jan. 28, in Seven Creeks Baptist Church in Nakina with burial in Gore Cemetery, Nakina.
A guestbook is available at inmanfuneralhome.com.